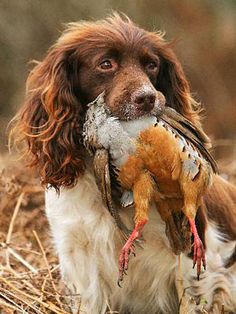 The English springer spaniel is one of several spaniel variants that share ancestors. Traditionally the spaniel breeds have been used as flushing dogs (opposed to pointing dogs) on the British Isles. The springer spaniel’s job is to flush out game within shooting range (25 metres).

The English Springer Spaniel was recognized as a breed by the English Kennel Club in 1902 and a breed standard was issued. Since then it has become an increasingly popular breed and is no longer just regarded as a hunting dog but also a cherished family pet and a working dog within fields such as bomb dogs, rescue dogs, narcotics dogs etc.

The breed is divided into two main branches: What we in Scandinavia know as the Field Trial type (the FT springer – in England and other places known as Spaniel – English springer (working type)) and the “show version”. The FT springer spaniel has been bred with a main focus on the dog’s hunting skills, whereas the standard (or show/bench) type – the one you will meet at dog shows – is bred based on conformation and has nevertheless retained great working skills in most of the individuals.

The springer spaniel is a working dog and that is the base upon which the breed standard has been written. That standard should secure that for generations to come it is bred so that it will be able to fulfil the task it was originally bred for.

illustration from the breed standard

An English springer spaniel is a dog of medium size. The breed standard dictates a height of 51 cm. (from floor to shoulder). No ideal weight has been defined, but they typically weigh about 19-25 kg. The body is well developed with an adequate bone structure. The breed must be moderate (not too heavy or too light) and soundly built.

The coat should be silky and weather resistant with adequate feathering to protect the dog from the weather and dense vegetation.

The typical colour of the springer spaniel is brown/white, but it is also seen in black/white. Both can be seen with reddish brown markings (tan) on the head, legs and under the tail. Such a variant is called tri-colour. None of the colours are preferable to the other.

The ESS should be friendly, open, lively, obedient and active. It is by no means a dog for those who want a watchdog.

It is an extremely friendly and wise breed, and as such requires a family who can stimulate him accordingly. At the same time it is a very social dog and it loves to be centre of attention and therefore should not be left alone for too many hours a day.

The breed should be social with other dogs, but some individuals are too cautious and react inappropriately in different situations. It is definitely an undesirable trait in the English springer spaniel, and is therefore something breeders should be very aware of. 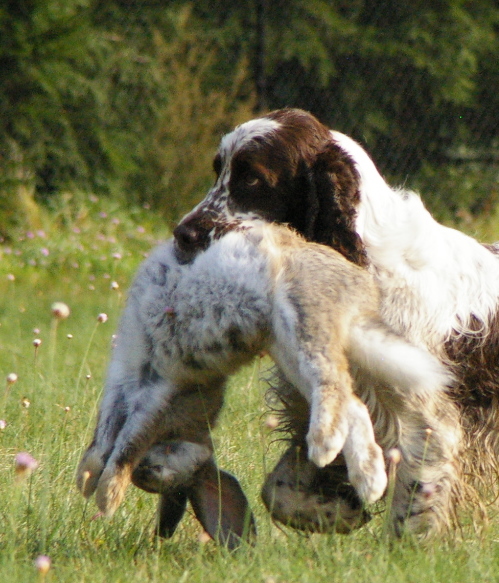 The vast majority of springer spaniels are tested for hip dysplasia (HD) and the eye disease PRA.

The Norwegian Spaniel Club reports problems with different skin conditions as well as weak immune systems and it is something breeders have been asked to be aware of.

Cancer also seem to be an issue in the breed.

The English springer spaniel is for you if:

You like fresh air and long walks, love the outdoors and want to have a companion for those long strolls in the woods. The springer spaniel is an intelligent dog and needs to be stimulated mentally.

It is too big and strong a dog for a pre-school child to handle, and it generally requires an owner who is active and has time for the dog.

Although the coat is moderate and relatively easy to deal with, the springer must still be groomed 5-6 times a year. Far more often if you have plans to show your dog.